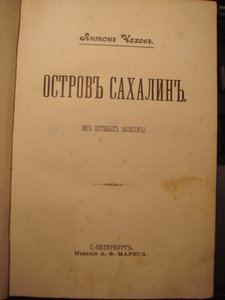 In 1895 Chekhov inscribed a copy of “Sakhalin Island” to Levitan: “I give this book to my dear Levitasha in case he commits a murder out of jealousy and ends up on this island.”

They sound like affectionate nicknames, and they are. Given the formality of salutations in 19th century Russia, the fact that Chekhov and Levitan used these diminutives when writing and talking to each other reveals much about the closeness of their relationship. These nicknames would only be used between people who addressed each other using the informal second-person singular form of “you,” which Chekhov and Levitan only started doing at some point between 1888 and 1890, when they had already known each other for about 10 years. Otherwise, Chekhov did not use the informal “you” with anyone else outside his family until he and the writer Ignaty Potapenko became friends in 1894. And even then, Potapenko said it was hard to feel really close to Chekhov. He was always holding something back “and that is why even the people closest to him felt a certain distance between them and him.” Potapenko concluded that Chekhov really had no friends in the common sense of the term.

Like Loading...
This entry was posted in Circle of Friends and tagged Ignaty Potapenko. Bookmark the permalink.