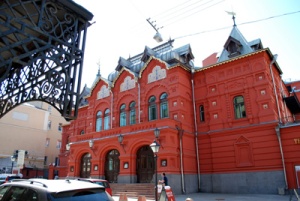 In April 1892 Levitan ran into Chekhov in front of Korsh’s Theatre and demanded an explanation why the writer had caricatured him and his mistress Sophia Kuvshinikova in his story “The Grasshopper.” Chekhov sharply replied that he didn’t owe him any sort of explanation. After this, they did not speak to each other for more than two and half years.

Levitan had recently been at Kuvshinikova’s salon where the young Tatiana Shchepkina-Kupernik, who hadn’t even met Chekhov yet, stirred things up by loudly saying to Kuvshinikova and Levitan: “’I don’t understand how Chekhov…It’s all very strange… He’s been at your house, enjoyed your hospitality, was considered a friend and suddenly publishes this disgusting story…How is this possible? It’s totally incomprehensible.” Coincidentally, Shchepkina-Kupernik, taking advantage of the fame of her actor-grandfather, managed to land some minor roles in Korsh’s Theatre the following summer, where she met the actress Lidia Yavorskaya, with whom she carried on a scandalous lesbian affair.

The Moscow businessman Fyodor Korsh founded his private theatre in 1882. It was here that Chekhov successfully staged his first full-length drama Ivanov in November 1887. More typical of the fare at Korsh’s Theatre, which tended toward farces and comedies, was the production of Chekhov’s one-act vaudeville The Bear in 1888.

Like Loading...
This entry was posted in Homes and Museums, Uncategorized and tagged Anton Chekhov, Isaac Levitan, Korsh's Theatre. Bookmark the permalink.