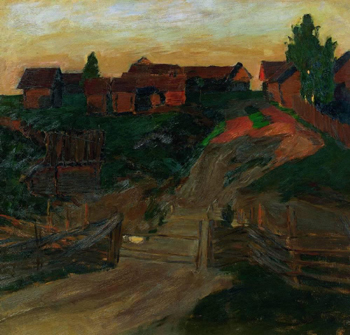 “The Last Rays of the Sun” (1899). As I stood in the Tretyakov Gallery looking at this painting, with its flat planes of muted colors moving towards abstraction, I found myself wondering what direction Levitan’s art would have taken had he lived another 20 years. He died in 1900 at the age of 39.

While Levitan is not well known outside of Russia, there is a small group of people in the U.S. and abroad who have long been inspired by his work: plein air painters. Unfortunately it’s very rarely possible to see his paintings outside of Russia, where the Tretyakov Gallery in Moscow and the Russian Museum in St. Petersburg each have a room devoted to him. In addition, Levitan himself left behind no notebooks, recollections or testaments about his work. He never published any articles other than a brief obituary of his mentor Alexei Savrasov.

The only accounting we have of Levitan’s own thoughts on his aesthetics and techniques is to be found in the memoirs written by students who attended his advanced landscape studio course, which he taught at the Moscow School of Painting during the last two years of his life. For Levitan there was an unmistakable poetic justice in being invited in 1898 to teach at the school. Fourteen years earlier the school had humiliated him by granting him a second-class degree that deemed him unqualified to teach painting. And now they were asking him, newly appointed as a member of the Academy of Arts, to assume the same position held by his teachers Savrasov and Vasily Polenov.

Levitan did not teach fundamentals. He treated the studio as a forum for instilling in his students the sensibilities and intellectual approach that he felt were necessary to succeed as an artist. Levitan repeatedly underscored that great landscape paintings shared the common traits of simplicity and expressiveness. In fact, simplicity was the key to achieving expressiveness, to visually distilling the essence of a landscape. He advised his students to paint with fewer colors and avoid putting any colors on their palette that they didn’t intend to use. He told them to avoid large-scale sketches, which only introduced “a lot of nonsense.” A small study was the best way to capture the essence of what a painter saw even if the final work was going to be large.

Levitan was proud of having achieved the status of academician and professor. He couldn’t resist taunting Chekhov: “Praise for me is beginning to overshadow yours. What do you think about that?” Chekhov joked that this probably meant he would no longer be able to address his friend using the informal “you.”

1 Response to Levitan: Professor of Art