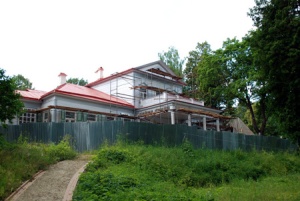 The manor house at Abramtsevo is being restored.

In early June 1885, Levitan left Chekhov’s dacha at Babkino for Savva Mamontov’s estate at Abramtsevo accompanied by the painter Victor Vasnetsov. The railroad baron Mamontov had turned Abramtsevo, located about 40 miles from Moscow, into an artist’s colony. The previous year Mamontov had started hiring artists rather than decorators to paint the background sets for his new private opera company. Mamontov’s financial generosity and the opportunity to collaborate with his fellow painters had much to do with Levitan’s willingness to do scene painting. But he told Korovin that working on “these enormous canvases made his head hurt and gave him nightmares.” Another former classmate recalled that painting on such a large scale agonized Levitan, given his love of detail.

At Abramtsevo, working from Vasnetsov’s sketches, Levitan painted scenes for the upcoming operas A Life for the Tsar and The Snow Maiden. But within two weeks he became seriously ill and returned to Moscow to recover. Unlike Korovin and Vasnetsov, Levitan stopped working for Mamontov by March 1886, when he used his earnings to make his first trip to the Crimea.

Chekhov’s attitude toward Mamontov’s undertaking was derisive. He wrote the following review in his “Fragments of Moscow Life” column following the premiere of The Mermaid in February 1885:

“…now Moscow has a bad Mamontov opera in addition to an unsatisfactory Imperial Opera. Everyone is struck by the new opera, but nothing is more striking than the amount of money squandered on it. The décor is magnificent. The scenery, painted by Vasnetsov, Yanov and Levitan, is splendid; the costumes are of the kind only dreamed of on the Imperial stage; the orchestra is made up of capable musicians very capably conducted; but the male and female singers—heaven help us!”