Chekhov’s study at Melikhovo. Prominently displayed on the wall is Levitan’s painting of the Istra River at Babkino, which the artist gave to Chekhov.

By early 1892 Chekhov had a sufficiently substantial income to finally act on his long-standing desire to buy a country home. In February, on his behalf, his brother Mikhail bought Melikhovo, nearly 600 acres of birch woods and pasture with a small wooden house located 45 miles south of Moscow. Getting there required taking a train as far as the station at Lopasnya (now called Chekhov), then travelling six miles by horse or carriage along a very rough country road. 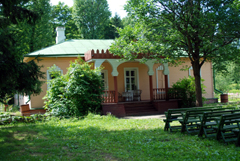 Chekhov moved there in March, and promptly asked his friends to come stay with him for Easter. Initially Lika Mizinova refused the invitation, causing Chekhov to feign taking offense: “We are nothing to you. We are last year’s starlings whose song has long been forgotten.” When she changed her mind and finally did come, Chekhov didn’t pay particular attention to her, spending most of his days off bird hunting with Levitan.

One evening Levitan wounded a woodcock in the wing. It fell into a puddle. Chekhov lifted it up and noticed its “long nose, large black eyes and beautiful attire. It looked at us with a surprised expression.” Levitan frowned, closed his eyes and asked Chekhov, his voice quivering: “My friend, smash its head with your rifle stock.” Chekhov told him he couldn’t. Levitan continued to nervously shrug his shoulders, shake his head and plead for Chekhov to do it. “In the end,” Chekhov told Suvorin, “I had to do what Levitan asked and I killed it. There was one less beautiful, beloved creature, and the two idiots returned home and sat down to dinner.” This incident stayed in Chekhov’s mind and inspired what would develop into the central image of The Seagull.

Levitan took this photograph at Melikhovo of Chekhov and his brother Mikhail sitting in a wheelbarrow pushed by Vladimir Gilyarovsky. (Easter 1892)

Like Loading...
This entry was posted in Homes and Museums, Melikhovo and tagged Anton Chekhov, Isaac Levitan, Melikhovo. Bookmark the permalink.